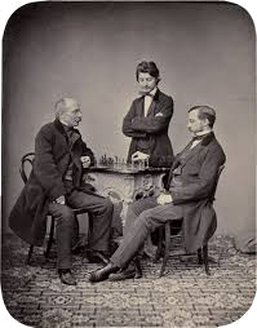 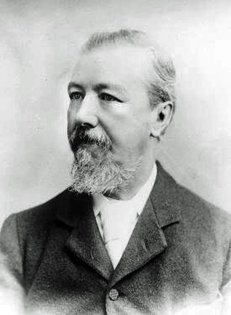 Joseph Henry Blackburne c 1890
​Early Days
​There has been a chess club in Redditch since at least the 1880's and probably much earlier.

​We know that there was a chess and draughts match played between the Redditch Chess and Debating Club and the St George's (Birmingham) club on Saturday 30th April 1881 in the Redditch club rooms. The match was played with 10 boards of chess and 3 boards of draughts, with refreshments after the game at the home of the Redditch club secretary Mr A G Bayliss. There was also a Redditch  Bromsgrove match in 1884 - again played on a Saturday.  We also know of a chess match between the Stratford and Redditch clubs played over two legs on 15th and 22nd November 1889.
In addition the legendary Joseph Henry Blackburne gave a simultaneous exhibition at the Temperance Society in Redditch in 1890. Blackburne is pictured above from a photograph from around the time of his exhibition games. He was the strongest British player of the time and regularly amongst the top five players in the world.

Chess club activities continued during the 1890's with records of Redditch matches against Lye in March 1895 and St George's in October 1895.

Aside from these early matches and events, the Redditch club (briefly) affiliated to the Birmingham League in 1900, with Redditch and St George's as early league members.

Redditch were second division champions for the 1900 to 1901 season, but it appears that Redditch left the Birmingham League in 1903 and we have no records of the club until 1925 when the constitution was drafted.

Following the club's re-establishment in 1925, Redditch has entered teams in various divisions of the Birmingham and Worcestershire Leagues.
We know that the club was active from 1925 onwards, aside from a short break during the second world war.
We believe that Redditch will have been playing in the Worcestershire league during this period - however we have no details of the clubs activities until the 1960s.

Club records indicate that John Roe was club secretary and one of the leading players in the 1960's . The club entered teams in the first and second divisions of the Worcestershire League and met weekly on Tuesdays (which is the current club night) at the Fleece Hotel in Evesham Street in Redditch.
There was some discussion of entering a team in the Birmingham league at the AGM of 1969 given the need to attract new members and the influx of people from Birmingham into the Redditch New Town areas - however a decision was taken to continue with just the two teams in the Worcestershire League.
​
The 1970's

The club grew in strength in the 1970's.
Jeff Heath had now joined the club and was one of the leading players, along with Jack Roe, Paul Robertson, Dave Aston, Rhys Bevan, Paul Thomas, Ken Butcher and Gary Boswell.
The club continued with two teams in the Worcestershire league and after much discussion at the 1974 AGM and a subsequent special meeting, a decision was taken to enter a Redditch team in the Birmingham league,  with the only space available being in Division 3.
Redditch made a strong showing in the BDCL Div 3, were quickly promoted to Div 2, and became  second division champions in the 1976-1977 season – repeating the great performance of 1902, but this time winning all their games with a 100% record.  Redditch's first team was now playing in the Birmingham League Division 1, with club teams also entered in the Worcestershire League.

The club continued to field one team in the Birmingham League and two teams in the Worcestershire league during the 1980's. Leading players in the club were Jeff Heath, Paul Robertson and Steve Wells.
The team was not as strong as the division winning side of the 70's and moved down to the second and then the third division of the BDCL by 1986.

2000 onwards
​
The club continued to meet at Salop Road during the 2000's and then moved via a couple of other venues to St John's Church Hall in Redditch and then to our current venue at the Alvechurch Sports and Social Club in Alvechurch.

Our first team has played in division two or three of the BDCL in recent times, with a second team in BDCL League division four.

We also have two teams Redditch A and B in the Worcester and District League.

As well as our league efforts, the club has continued to enter teams in various competitions.

We also won the Homer Trophy for the first time as well as the Wheatley Cup in the 2016-2017 season.